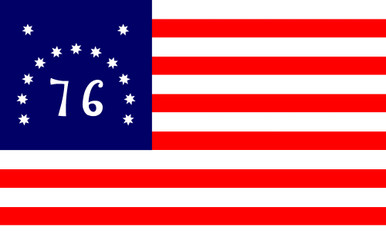 Before we get too concerned about the design of the so-called "Bennington Flag" please note that the actual relic flag is on display at the museum in Bennington, Vermont. Grace Cooper, NAVA member and former curator of textiles at the Smithsonian Institution has observed this flag at close range and is of the opinion that its material was woven on a power loom in the early 19th Century. There is no record of this flag or its design prior to the _late_ 19th Century when it was on display at the Chicago Public Library. The oral family tradition that went with this flag stated that it flew at the Battle of Bennington in 1777, (by Nathaniel Fillmore, grandfather of U.S. President Millard Fillmore). In 1926 it was donated to the Bennington folks by the last Fillmore family owner. There is definitely no contemporary reference to a stars and stripes flag of any design carried at the Battle of Bennington. (The Bennington Museum does have the remnant of a green silk flag with a blue canton. The canton has 13 stars in an irregular pattern. It is known as the?ÿGreen Mountain Boys?ÿflag, and there seems to be no dispute over its claimed use during the 1770's.)The "Bennington Flag" is 13 white and red stripes, beginning and ending with white stripes. The blue canton is nine stripes deep, resting on a red stripe. It has an arch of 11 seven pointed white stars with two additional stars in the upper corners of the canton. Within the arch is the number "76" referring to the date of the Declaration of Independence. The construction of the flag and the use of the numeral "76" is characteristic of the 1820's. It is likely that this flag was made for the 1824 visit of General Lafayette to the U.S., or for the 50th anniversary of the U.S. Declaration of Independence in 1826. (I say that the "76" is characteristic of the 19th century because the "Headman Color", a Revolutionary War flag in the Smithsonian, has "OLD 76" painted on it. This legend is not contemporary with the rest of the flag. It is believed to have been painted on long after the war- probably in conjunction with the 50th anniversary in the 1820's.)Some vexillologists state that the "Bennington Flag" may have been made as late as the U.S. Centennial in 1876, but I don't see how it could have received that much wear and ageing that people began to think of it as a Revolutionary War relic and display it as such in the Chicago Library within a few short years. (The relic flag is quite faded - the red, white, and blue are all just various shades of tan or brown today.) What _does_ seem likely is that in the historic frenzy of the Centennial celebration, a 50-year old 13-star flag was discovered, tattered and torn, and displayed as an authentic 100-year old relic in ignorance (the standards for historical research were not quite as high then as they are today.)Nick Artimovich, 15 November 1996