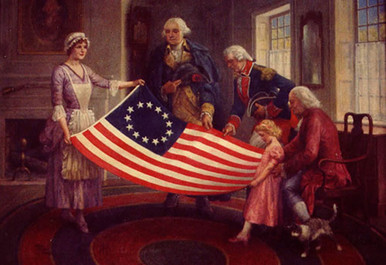 Betsy Ross is the most famous flag maker in America, if not the world.

Our illustrious neighbor notoriously folded and cut once some cotton to reveal the five pointed star. George Washington was not yet the President of the United States, in fact the USA was yet to be unless in a dream, while he met Betsy Ross (nee Griscolm) at Christs Church on one particular Sunday.

Betsy was a Quaker, and that was dangerous then, as it is now. Still, a Quaker wedding is arguably a sight none wouldnt want to behold, let alone risk.

The Betsy Ross Flag is not without controversy. However to not relish such would be unfortunate. The Great Chris Johnson proposed unapologetically that Francis Hopkinson should hold the honorable title of designer of the flag. And to be sure, Hopkinson played a part. History is of course great and fun, and flags are symbols as much as possible.

The Betsy Ross Flag iconically represents the thirteen colonies and is a symbol of the early days of the USA.