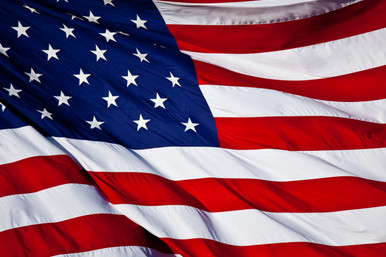 Nylon flags are our standard, high quality flags. They easily catch the wind and glow when kissed by the sun. Nylon flags are durable and color fast.?ÿ Please call or email for custom finishing or sizes. ?ÿ ?ÿ About the US Flag: Old Glory, The Stars and Stripes, the flag of the United States is a symbol for democracy and free society the world over. ?ÿBlue stands for loyalty, red for courage, white for purity. ?ÿ(Znamierowski and Slater) There are many creation stories associated with the US flag, the most famous is the story of Besty Ross -- who lived across the street from Humphrys' Philadelphia HQ. ?ÿThe Besty Ross flag is a circle of thirteen five-pointed stars. ?ÿThe story goes that Betsy knew how to cut a five-pointed star with one snip of her scissors - a feat that impressed Washington while simplifying production. Betsy Ross' claim as the first US flag maker is disputed by advocates of Francis Hopkinson. ?ÿThe so-called Hopkinson flag places stars in the familiar staggered pattern ordained by Taft in the early 1900s. ?ÿWas Taft's confirmation of the Hopkinson Stagger also his refute to the recent claim by Ross' decedants? Why a staggered pattern? ?ÿAt the local Dock St Tavern Hopkinson, who also designed the Great Seal of the United States, rubbed shoulders with US founding fathers. As partial payment for the contract to design the US flag - a new constellation of stars - Hopkinson was awarded a barrel of wine. ?ÿ Prior to Taft's flag act the requirements for what constituted a US flag were extremely relaxed - an excellent example being the Easton Flag of Easton, PA. ?ÿThe Easton flag places red and white stripes in the canton while the field is made up thirteen eight-pointed stars, and ovular twelve surrounding a central solitary star. The Bennington Flag is an interesting variation with thirteen seven-pointed stars arranged in a Masonic arch over the numerals "76"; the flag's red and white stripes start and end in white. ?ÿThe Bennington flag and the Easton are to some regarded as regimental flags putting a twist on the design enumerated by the original Flag Resolution; to others these flags are in fact variations of the US flag which at the time would have been considered worthy and righteous symbols of the young USA - plurality of variation being symptomatic of the fiercely independent citizenry.?ÿ Despite all this flag variation the main elements - stars and stripes - are consistent. However what we think of a star was not always a star. ?ÿFor centuries European heraldry specified a star as having at least six points. ?ÿA five-pointed star did not exist, the five-pointed symbol pierced in its center, a mullet or a knight's spur, symbolizes a family's military prestige. Noticeably, three red mullets are depicted on Washington's coat of arms over two red stripes separated by a white stripe, all on a field of white. Washington's coat of arms is the basis for the flag of Washington D.C.?ÿ ?ÿ ?ÿ